The building is in Romanesque style, with the typical features of Lombardy and more precisely of the Lake of  Como.
There is no document fixing the exact foundation date, thought the buildings are thought to date back to the end of the 11th  centuries because of some structures and buildings techniques (see the South outer wall of the Oratory of San Giorgio leading  to the staircase, in hewn stone, with small splayed windows and small portal).

The bell tower is astride a small porch which in the churches of this period were always in the eastern side, were later moved to the opposite side; consequently, the entry was opened in the wall facing the street.In the chapter-house you can find walnut choir-seats, sculpted in baroque style; a big fresco on the vault of the room represent the Holy Virgin giving a monk a belt.

The building of the actual town hall was used as a hospital dedicated to St. George and St. Eustachius, and is mentioned as already pre-existent in ducal rescripts, of 1418, when the hospital already belonged to the municipally.
In 1505 the municipality yielded it up to the Augustinian monks of Como, on condition that they should celebrate two Holy Masses there, give the poor of the borough eight wine-kegs and two bushels of corn, and support a preacher who would preach in the church of San Giacomo there times a week during Lent.

On the 23rd  February 1657 the parish of San Giacomo in Borgo was erected with some territory taken away from San Giovanni, and the following year the Augustinian Fathers of San Giorgio founded a men’s confraternity, dedicating it to the Holy Virgin of the Belt (cintura); this antique devotion to Mary derives from the tradition of the gift of a Belt from the Virgin Mary to Sta.Monica, who was St.Augustin’s mother.
The tradition of this gift is represented with the ancient statue venerated in this church, as well as on one stain-glass window of St.James’s Church, and with many other sacral objects
.On  9th  July 1671 the Confraternity was officially recognized by the bishop of Como, Lazzaro II Carafino.
In 1685 the Confraternity of the “cinturati” was associated to the Arch confraternity of San Giacomo in Bologna.
On 1808, with the consent and the approval of the diocesan ecclesiastical authority, the Confraternity took on the name of the Holy Sacrament and was called the Confraternity of the Holy Sacrament under the patronage of the Holy Virgin of the Belt. 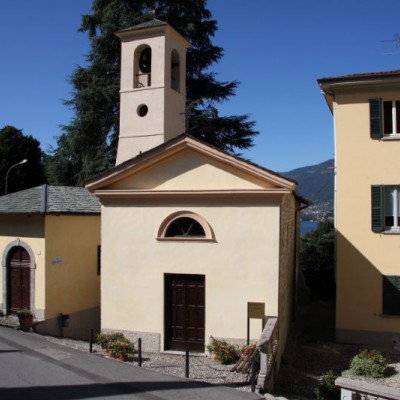 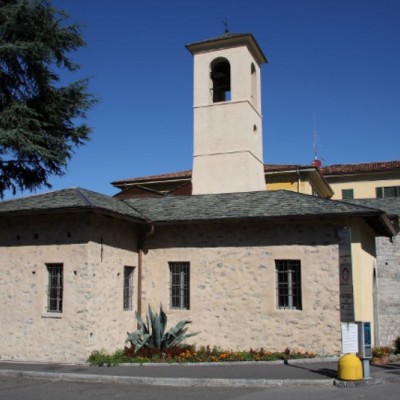 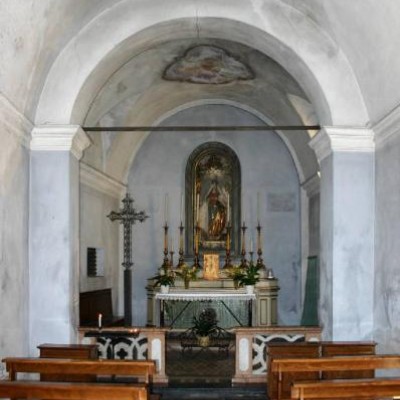 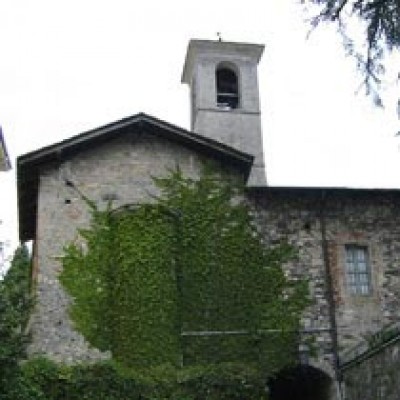